Ardmore, PA and the Philadelphia area in general recently hosted the U.S. Open, which was held on the East course at Merion.  It was an exciting time for Philadelphia, as we had a chance to show the golf world how much history, prestige and immense quantity of top shelf courses, public and private, reside here.  Leading up to the Open, it was great to read in the national golf magazines about the demise and possible rejuvenation of Cobbs Creek Olde, the recommendations made for where out of towners should play (not to toot my own horn, but I published my own article on this topic back in January 2012) and the tournament history of the local courses, including Merion, which has hosted more U.S. Opens than any other course.

It’s been a while since Merion hosted a major (over 30 years, but who’s counting?), and there are a few main reasons for that.  Logistically, the U.S. Open has grown in popularity and scale that it simply overwhelms the course and surrounding area.  A slew of demands need to be met for the gigantic crowd that shows up for the entire week.  An array of tents and viewing areas are also necessary.  The truth is that Merion simply doesn’t have the square footage to host an Open without the full fledged support of the local community.  Private residences were used for various purposes, the nearby Haverford College was virtually taken over, players and spectators had to be shuttled to/from the driving range at the West course about a mile away and the surrounding roads had to be closed to allow spectators to walk around.  All of this took considerable effort and cooperation and quite honestly, I was astonished it went as smoothly as it did.
Another reason, and it might be the main reason, why Merion has not hosted the Open for over three decades, is the growing concern that the pros would annihilate these older classic courses because of their shorter length.  With modern equipment and the swing speed the pros generate, many feel that a course like Merion, which tops out around 6900 yards, would be overpowered by the pros, turning into a bomb and gouge/driver wedge driver wedge fest.  Indeed, many of old guard, Jack Nicklaus among them, feel that the golf ball should be limited in distance because this epidemic of distance will render all but the monster courses obsolete.  And so, I imagine for a long time, Merion and other courses like it weren’t considered for the Open because many thought the game had simply outgrown them.
The USGA, and Mike Davis in particular, however, were determined to make a point.  The point was that classic courses like Merion could still prove to be formidable for the pros, even for a major, and even for the major that is widely considered the most difficult of all.  Merion was awarded an Open and the community, along with the membership of Merion, pulled together to make it happen.  The grounds crew and Mike Davis then were meticulous in setting up the course.  Fairways were narrow, roughs were punishing, greens were fast yet subtle and the players were forced to think, rather than blast, their way around the course.  And despite the course being hit with tons of water just before play, making almost everyone afraid that the tipping point in the pros murdering the course and shattering scoring records was reached, it played to par and Justin Rose, someone who has been playing brilliant golf recently and is on the short list of best golfers without a major, broke through for the win.  As far as I’m concerned, it was a great Open.  More importantly, Davis made his point.  A course can play tough yet fair without distance being the primary factor.  The pros were given decisions on how to approach each hole, with risk/reward decisions every where.  It was no mistake that the top of the leader board was full of guys who play steady, consistent, smart, well executed golf.  My hope is that the fact Merion held her own and demanded precise smart golf opens the door a little to other classic courses hosting the Open as well.  Modern venues are definitely exciting, but I’d love to see a little more diversity with the courses.  I don’t think I’m alone, as Chambers Bay and Erin Hills will be hosting in the next few years.  Both are first timers.  How about putting Scioto, Chicago Golf Club, or (a couple of my sleepers) Valley Club of Montecito or Camargo into the rotation?
I drive by Merion to and from work each day, so I’ve seen the set up taking form for months, and now the disassembly slowly occur.  I was also a volunteer for the week, so this Open is likely the closest and most personable one I’ll experience.  I was on the course every day but Sunday.  There is something else to mention about the experience I don’t think modern venues can offer; less people.  The smaller course provided a more intimate experience with the players and the competition, as opposed to some where like Medina, where there is usually hundreds of yards between you and the action.  This aspect of the setting probably did a lot to turn back the clock, as it was very easy to hear the players and caddies conversing before and after their shots.  All of this added to a great golf viewing experience throughout the week.
I walked the course every day except Saturday, where I camped out at the Seventeenth green all day.  I’ve never just stayed in one place and watched every group come through, so I decided the Seventeenth would be the place to be.  And of course, the last group that came through, included Phil Mickelson, who hit it to within 4 feet of the pin and nailed the putt for birdie, taking the lead into the fourth round.  During his post round press conference, Phil said it was one of the best shots he hit in his career.  It was a nice shot to see in person for sure.
As for Philadelphia, the press did a great job of re discovering the prevalent golf roots in the area.  It was nice to see Golfadelphia in all its glory.
Obviously, I took a few photos:
An exclamation point on the history of the week, I was walking around the First hole when I saw a bunch of commotion around the tee area.  So I sauntered over and oh yeah, just almost every U.S. Open Champion in the last 30+ years hanging out for photos: 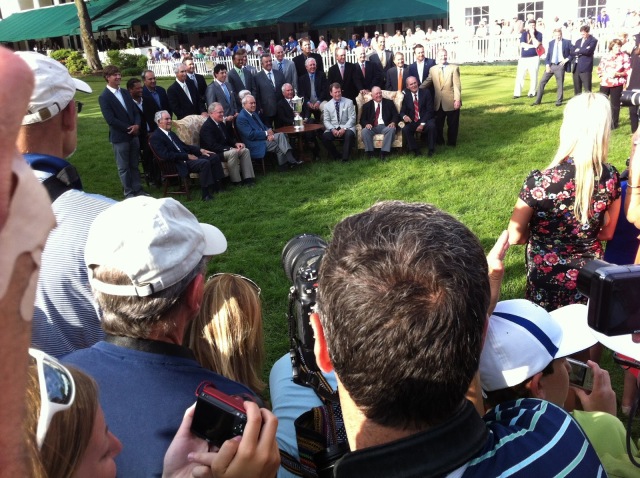 Then the champs strolled over to the patio:

Getting to the stands Saturday morning was brutal.  The second round just ended and the third round times began around 12:30.  That meant golfers wouldn’t even start playing the Seventeenth until around 1:30, which meant I sat there in the sun, in the stands, for three hours before I even saw any golf.  I met some new friends and also got to see the USGA install the pin placement.  Very interesting indeed.