I was able to make it to Medinah this week to check out the action.

Also, got some golf in at these courses:

But back to Medinah:

….and all that comes with it.

Did I mention I was there on one of the practice round days?  Can’t imagine how the crowds were during the competition days.

At any rate, my Dad was able to get some tickets through the lottery system when they first came out, so we showed up for a Ryder Cup/Chicago Golf extravaganza.

We were there on Thursday, the last practice day before the matches started the next day.  By that time, the players were familiar with the course and were fine tuning how they played each hole and paid close attention to the greens in particular.  Each group spent at least 15 minutes putting and chipping from different areas around and on each green as they made their way around the course.

The Euros went out in foursomes while the Americans went out in the pairs they would be in the following day.  Except for Tiger, Dustin, Stricker and Kooch, who all went out together.  To be honest, the Euros seemed to have a more regimented practice.  They’d all hit a few off the tee, would hit their approach shots, then would work the green for a while and move on.  In contrast, the Americans would discuss a lot more, would hit the same shot a few times from the same spot, and would work the green for much longer.  Shows how much I know, as of this writing, the U.S. is up 10 – 6.  The greens definitely got the most attention, further proving true the drive for show, putt for dough mantra.  The best shots I saw were from the Phil/Keegan pair.  On the Fourteenth, Phil sliced his drive far and left into the trees, then some how hit a high cut over the trees that landed in front of the green.  I guess he’s used to getting out of trouble with his tee shots, but it was amazing.  For me, that would have been a 20 yard punch shot back in the fairway.  Not to be outdone, Keegs holed out on the Fifteenth from about 120 yards out, as he and Phil hit lay up tee shots to test that strategy.  The Fifteenth is the drivable par 4, so it appeared they were determining whether it made sense to lay up and avoid all the trouble around the green.

As for the Medinah, it is a gigantic facility.  In addition to the course hosting the Cup, they have at least another 18 holes, tennis courts, a gun range, a zoo, and a NASCAR speedway.  I only made a couple of those up, but there is a lot of land here.  From the entry, it was about a 10 – 15 minute walk just to get to the first tee.  To be honest, the place reminded me of Disneyland.  Large, lots of trees, gorgeous, and a ton of characters.

The course itself is wooded land laid out over a couple of large lakes and ponds that features forced carries over said water, dog legs around these tall trees and contoured fairways that create blind shots and elevated greens.  Bunkers are placed strategically and sparingly.  It’s consistently ranked in the top 50 in the world.  I didn’t play the course and am not sure if I’ve ever had a chance to play any of the world’s top courses, so I can’t comment on whether it deserves the accolades.  If I had to compare the course to something locally, I would go with a combination of Jeffersonville, the back 9 at Bellewood and Five Ponds.  It definitely looked like a birdie fest for the pros, with the main defense probably being the greens.  There is very little rough (per DLIII’s instructions to favor the U.S. team) and even if a ball goes into the trees, will very likely have a good lie.

We showed up in the early morning and the surrounding area was already jumping.  Medinah CC is in the small town of Medinah, IL.  The club is in a residential area, so all of the nearby neighbors were offering parking.  I know there was official parking some where, but for $20, we were able to park literally across the street.  As I wrote above, the place is huge, so you’re basically walking forever before you reach the main area, which housed the merchandise store (huge) and other tents.  So once we got our hats and shirts and got our bearings, we were ready to watch the players practice.  Go over to the first hole, empty.  Ok, um, where exactly are the players?  Good question, and one that prevailed throughout the day.  The only indication telling us were two boards, which we saw as we walked over to the back 9.  Yet the signs were usually telling us where the players were 30 minutes ago.  So actually finding players became a challenge in itself, which was surprising, since, you know, the PGA decided to sell tickets to these rounds and presented it as a spectator event.  We then realized some of the groups (especially Tiger) were skipping holes, so even though we waited 20 minutes on the Sixteenth while Tiger’s group hung around the Fifteenth green, we only got to see them take carts to the front 9.

We finally ran into Phil/Keegan and latched onto them for a while.  Everything I heard about Phil held true.  Made time for the fans, engaged them in conversation, etc.  Seemed like a genuinely nice guy.

A bunch of other pics of Pheegan. 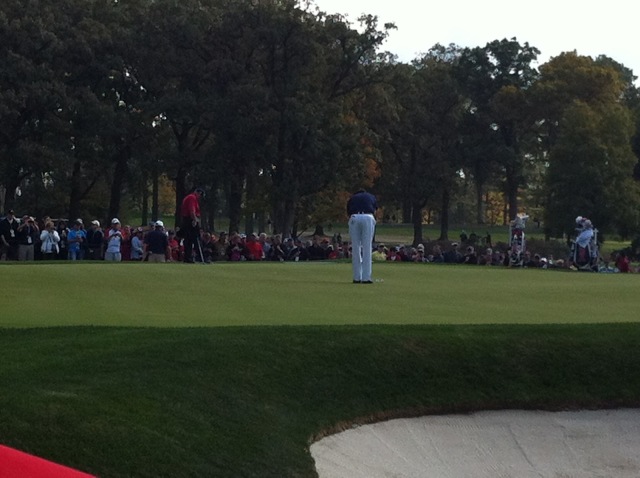 We then figured out most of the groups were playing their way to the Fifteenth, so we made our way over there and hung out near the green to see how they played the hole.  We saw the three Euro groups come through.  They also made time for the fans, signed autographs, posed for photos, etc.  Westwood clearly looked like he led the pack and determined when they moved from the tee to green and then on to the next hole.  Poulter didn’t look good, but then he went on to an epic performance, so obviously I continue to know nothing.  Here are a bunch of pics of the Euros at the Fifteenth.

We then found some of the other Americans.

Finally, other random photos I took.

Generally, it was great to go out there and check things out, even for a practice round.  It was obviously different than seeing a tournament, but I enjoyed watching these guys trying to get the course wired.  They even took second and third shots if they didn’t like how the first one turned out, like I do!  Yeah it was annoying because the exit was poorly designed and created a bottleneck crowd and yeah some of the European spectators were annoying, as they would cut you off and try to get in front of you to see the players (no sense of personal space I guess), but you’re getting those things at almost any sporting event you go to.  To be fair, some of the Europeans were cool and liked to talk golf, so that’s a plus in my book.

I’d recommend going to a Ryder Cup practice round if you’re really into golf.  I’ll probably look into tickets when the Cup comes back to the U.S., then try and buy tickets to a competition round while I’m there.  There were a bunch of people selling tickets, so I doubt it’d be tough.  And if I don’t score those tickets for some reason, I’ll go out to some of the local course for 36 holes.  It’s a win win!  With the crowds, I imagine the best viewing chance lies with getting to the course as soon as it opens, finding a good spot, then planting yourself there.  I don’t think you’d be able to follow a group around and see every shot; you’d be at least 4 or 5 people deep on each shot.

Obviously, I played a couple rounds when I was out in Chicago, so will get those up shortly.