Course:  Just outside Denver, CO in Littleton, CO sits Arrowhead GC, a course designed by Robert Trent Jones, Jr.  Arrowhead is a truly distinct course, mainly due to the red rock formations that litter the hilly terrain.  The formations are consistent throughout the round, so it’s not something you see on just one hole as a marketing gimmick.  The rocks are scenic and unique, but the way they are brought into the design is also well done.  There are many holes shaped by the rocks, other times they loom along the sides of the hole.  On one occasion, you have the option to hit your drive clear over one of the larger ones.  With rivers and water also coming into play, you get a very challenging, breathtaking, mountainesque course that typifies what many expect out of a quality public track in this area of the country. 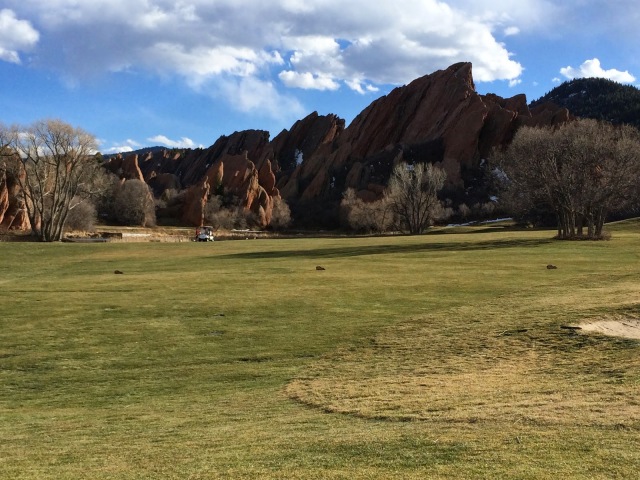 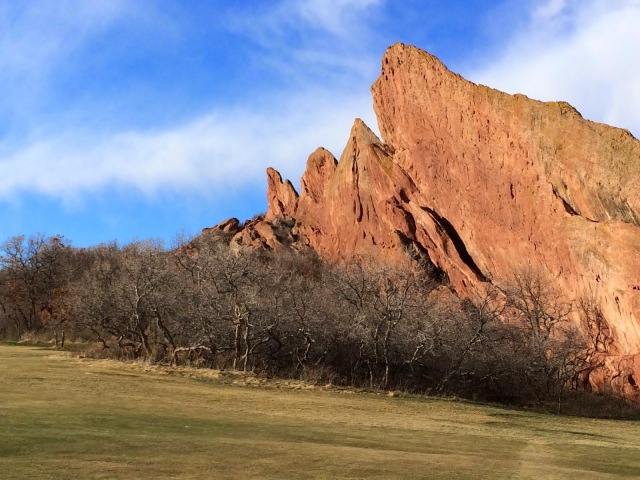 I was in the area and in desperate need of some golf after one of the more brutal winters on record.  I liked everything I saw and heard about Arrowhead, so I was able to get out there for one of the first rounds of the season and my first ever in the state.  I was able to meet a few friends from the area who were more than happy to play a round here.  After barely making the tee time, I had time for a couple swings at the range and with that, we headed out for me to start another glorious golf season in style.

The First is a 434 yard par 4 (Arrowhead tees).  You start things off on an elevated tee, hitting down to the fairway with some of the rocks on your left and a bunker structure on the right to collect shorter shots.  The fairway cants from right to left, but so it helps to aim at the bunker and let the ball roll to the left side of the fairway.  Your look at the green is a little impaired the further left you go, but there’s not too much trouble near the green except for a couple bunkers that will only collect very errant mis hits.

The Second is a 554 par 5.  It’s all uphill as well, with the green at the top of the hill and blind from the fairway for the most part.  It’s a beast of a hole and although the fairway is generously wide, you really have to belt it to get it to the green in regulation.

The Third lets off a little with a 197 yard par 3.  The green is downhill from the tee and you have the high altitude helping you, so it played more like 175.  The green slopes from left to right and cross bunkers are on either side of the green.  I like the rock formation as a backstop on the far end of the green, which presents an unusual hazard if you carry the green.  It can bounce off that rock, or leave you with an awkward stance if it’s sitting against it.  We had a crew working on one of the bunkers, so that was an extra bonus hazard out there for us.

The Fourth is a 414 yard par 4.  You’re on another elevated tee, this one more severely elevated than the Third, and the hole is a hard dog leg right.  Driver is likely too much to the end of the turn, but if you cut the turn, you have a shot at carrying the trees and bunker to the edge of the fairway, which ends at a pond.  You then have to carry water to the green, which sits above the fairway at the base of a hill. There are multiple ways to play this hole for sure, but it certainly requires two well struck shots for a chance at par.

The Fifth is a 337 yard par 4.  You get another great view from the tee, where some of the red rocks start coming into play a little, as a larger one on the right blocks the view of the green.  A good drive leaves you with a nice short iron into the green, which sits well above the fairway and is defended by bunkers.  Any tee shot too far right and you’ll have to carry the red rock to get to the green.

The Sixth is a 442 yard par 4.  There really isn’t much to this hole; it’s straight, goes uphill a little and has a pretty wide fairway.  The green is likewise generous.

The Seventh is a 351 yard par 4.  There’s a break in the middle of the fairway that forced you to decide between driver or laying up.  Unless you are very long, laying up seems like the better option, as it still leaves you with a short iron into the green.  This hole is picturesque and aside from figuring out which clubs you want to use to get to the green, is a good scoring opportunity.

The Eighth is a 356 yard par 4.  Yes, that’s five par 4’s in a row, but it doesn’t feel monotonous.  The elevation changes, distances and hazards vary that you’re using different clubs in your bag through this stretch of holes.  The Eighth is no exception to this, as it’s narrow fairway snakes uphill to a a wide green, definitely making this hole longer than it says.  Bunkers are placed about the fairway and especially around the green, which seem to do a pretty good job of collecting shots that are even slightly off line.

The Ninth is a 133 yard par 3.  Another gorgeous hole, as you look down on the green from the elevated tee, with water to the right and an impressive row of pointed red rocks in the background.  The green is shallow but wide and there are bunkers around green to keep your tee shot honest.  A great hole to end the front nine.

The front nine is a nice collection of varying par 4’s utilizing elevation changes effectively and a couple good looking par 3’s that are fun to play.  The par 5 is a beast.  Aside from a couple holes that felt a little standard, it was a good mix of scenery, fun and challenge.  Ranking them, I’d go 9, 4, 5, 3, 7, 8, 1, 2, 6.

As pleasant as the front nine was, the back nine really made this place memorable for me.  The back nine starts with the 400 yard Tenth.  You tee off to a fairway that descends down hill with a row of larger trees lining the right side.  The green is tucked in to the right of the fairway, in line with the row of trees, so the left to left of center is preferred off the tee.  Lots of red rocks in the back drop give this hole some pep.

The Eleventh is a 145 yard par 3.  The green sits at the base of the larger red rock you see in the photo above.  It’s one of the easier holes on the course because all you need is a well struck short iron to the green.  But if you mis hit, the surrounding OB and foliage can make it much trickier.

The Twelfth is a 408 yard par 4.  The tee landing area is wide, but then hole then dog legs left and narrows considerably to a green that slopes severely from back right to front left.  Driver is generally too long to reach the turn, so make sure your distances are in order and nailing the approach shot is important here because of the tough green.

The Thirteenth begins a stretch of holes where you actually get into and between the red rocks, making for some dramatically cool scenery.  The Thirteenth is a 171 yard par 3 set between a narrow opening of the rocks, with a river in the background.  The tee is elevated, so you have everything in front of and below you; the earth, the water, the air and golf.  It’s a unique hole for sure.

The Fourteenth is a 328 yard par 4.  The tee shot is another breathtaking view of the river, where the tee area is a chute between the red rocks, over the river to a wider fairway.  The green is elevated, but the approach shot should be easy enough because of how short the hole is.  A great hole in the perfect place during the round.  You’re in the middle of the rocks in total isolation.

The Fifteenth is a 397 yard par 4.  The tee shot is another great one, as there is a giant red rock slab directly in front of you off to the right that definitely comes into play.  You can try hitting over it, or hitting to the narrow part of the fairway to the left of it.  The green is blind because the fairway dog legs slightly around the slab and uphill to a green that features a run off on the front.  The hole definitely plays longer than its yardage.

The Sixteenth is a 562 yard par 5.  Uphill, then starts downhill around the mid point of the hole.  With a ton of wind.  It’s a beast of a hole, but the fairway is wide and so is the green.  The view at the top of the green is also broad, which shows the diversity of the topography here, going from in between rocks snaking along rivers to the top of a ridge, overlooking the valley below.

The Seventeenth is a 184 yard par 3.  This is pretty close to a complete forced carry to the green, as water intrudes almost all the way to the center while there is not very much room off to the left.  The green slopes from back to front/right to left and plays shorter than the distance, so take dead aim at the flagstick and favor being long over anything else.

The Eighteenth is a 489 yard par 5.  The tee shot is blind because the fairway crests, and there is water in play off the tee towards the left.  The fairway then climbs uphill to the green, which is pretty large.  The tee shot is likely the most important one, as two carefully thought out shots thereafter should easily put you in a good position on the green.  It’s a little anti climactic and you quickly realize the best holes are behind you, but I suppose it’s a gentle let off before ending the round.  The view at the top of the green, however, is rewarding, as it looks down at the gathering of the red rocks you just finished playing amongst.

Playing between the red rock formations and figuring out ways to place fairways around and over them was well done by RTJII.  Enjoying the rivers making their way through the cathedral-like rock formations towering in the sky while I was faced with a challenging lay out was a great experience. The design, setting and views make Arrowhead one of the more well regarded courses in Colorado.  With good reason.

Gripes:  The driving range is irons only.  I lost my driver head cover and no one returned it.  Not the course’s fault, but still.  It’s still technically winter golf, so a lot of things are lax, but they let us know everything up front and the course was still in pretty good condition.

Bar/Grill:  A nice indoor area and balcony overlooking the Tenth hole.  Also a separate bar.  It looked like it was nice enough that non golfers were stopping in.

Practice area:  I believe it’s just the driving range, but I could have missed a putting green some where.

Getting there:  It’s about 45 minutes south Denver.  I think it’s 70S, then a couple side roads.

One thought on “Arrowhead GC”